I haven’t been to a basketball game of Sarah’s in a while. Bethany had pneumonia, then there were a couple weeks off for Christmas, then Elise had pneumonia, then last week we were gone…so…I was excited to go last Saturday. Sarah has the unfortunate ability to always be on the worst team in the league. I really don’t think it has too much to do with the fact that she is on the team…it’s just the combination of girls. Her team has two girls with height, and only a couple that can shoot. Compare that to the team we played Saturday: 4 with height and one that could handle the ball like no other 6th grader I’ve ever seen. So, Sarah’s team lost. Again. They have yet to win. Saturday it was 22-11. Sarah did have 4 of those 11 points, so she did her share. She even had a rebound, but she started off kind of slow and getting into trouble with that girl on the other team that can handle the ball. So the coach moved her to a different position. But Sarah’s always putting in 100% effort and she’s improving bit by bit.

I do worry about next year, when she can try out for the school team. I know there are quite a few girls in her grade that are good at basketball and they play on these select teams (& they’re all best friends with each other) and such. It’s pretty ridiculous – traveling all over the state for tournaments every other weekend for an 11-year-old. Thankfully, while Sarah loves basketball, she loves other things, too. I would love for her to have the opportunity to play on a team for school – there’s just something about that…practicing with her classmates every day, riding on a bus and competing as a school team. It’s a good experience to have once, if you enjoy the sport. Sarah enjoys the sport. I just pray that she will get that chance once, but that if she doesn’t, we’ll both have the grace to accept it and move on and learn from the experience. There will be lots of opportunities for a girl like Sarah, in many different arenas. I’m so proud of how she’s growing up – she loves life and everything she does, she’s kind and loving and considerate and giving, she’s fun and smart. She’s a little scatter-brained once in a while, but that’s good teasing fodder. ;)

Anyway, enough mush and gush about Sarah. Here’s a couple pictures from Saturday’s game…she did not make that free-throw, but it pretty much went around the rim and popped back out, so it was close, and her form was decent. The second picture shows a ball in the air, which does score a basket and she did shoot it…she’s just mostly behind other players in the pictures. 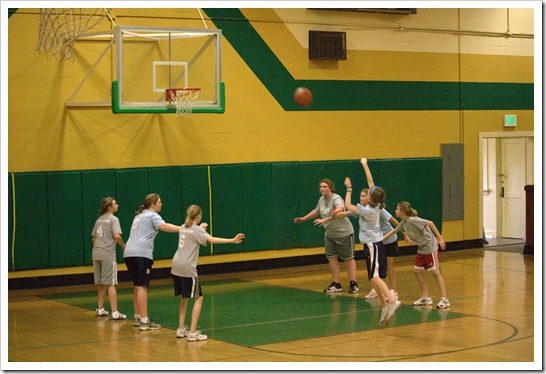 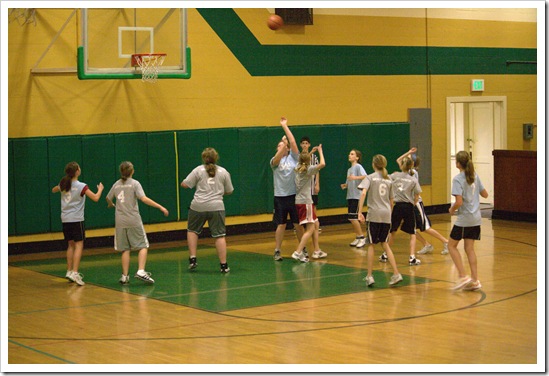 Isn't it amazing how much love God has given and continues to give us for our children.? I always think it is so amazing that I have so much hope, wish and desire for another person in this world. It also makes you realize how much your own parents must have loved you. Your a good mom Julie!!